I finished my time in the Middle East with two more days in Dubai, with no deadlines or projects or assignments hanging over my head. It was still sweltering out, so I mostly stayed in air conditioned areas. Two of note were the Burj Khalifa and the Mall of the Emirates.
The Mall of the Emirates was huge, and mainly consisted of high priced designer clothes. It also included an indoor ski area. It's nothing compared to an actual mountain, but I suppose when you're in the middle of the desert, you have to make do with what you have. 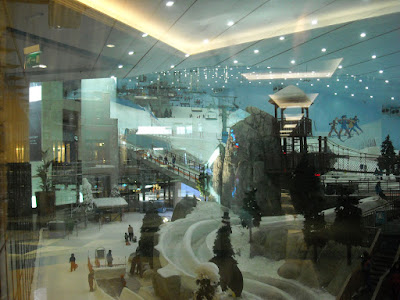 Getting to the observation deck on 140th floor (out of 160) of the Burj Khalifa (currently the tallest building in the world) was a bit of a pain. I bought my ticket around noon, and was told to come back at 9:30pm. When I entered through the first gate at 9:30, I found myself in a waiting area. 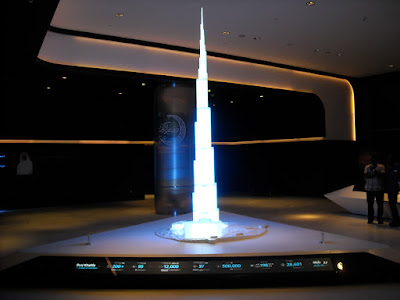 It took another hour to get through various lines and up the long elevator ride to the observation deck. By that point I was very tired and footsore, and about ready to be out of the country. The view was pretty fantastic, though: 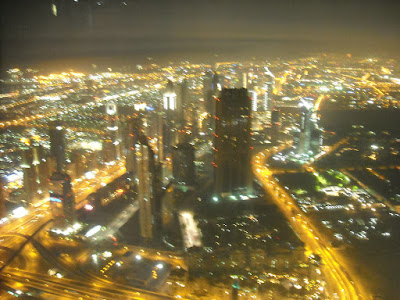 One last view of the Burj Khalifa on my last night in Dubai: 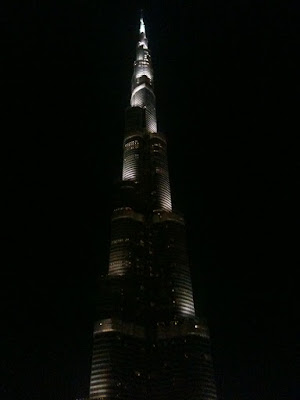 All my pictures from Abu Dhabi and Dubai (often with further comments) can be found here.
Some final thoughts:
While a lot of the building in Dubai showed what unfettered human creativity can construct, defying the laws of gravity and common sense, I came away from the area with a deep impression that the entire area was entirely artificial, almost as if a thin sheet of plastic had been stretched over the desert to hide the sand, and that was all the foundation to be found underneath this glittering metropolis. It seemed that half the luxurious skyscrapers I passed had "for rent" signs hanging prominently out front, even as new buildings were going up next door. And often, I could see strips of sand were the carefully maintained grounds of one building ended and the next began.
The air in this region holds a lot of dust, and in the daylight many of the brand new glass and steel structures look like expensive cars that have not been washed in a year - grimy and dirty.
There's a lot to say about the people, as well. I definitely did not pick up on any anti-american vibe, and I stuck out like a sore thumb. At the airport, when I had to call in to the training center for driving directions, a random guy simply gave me his phone card, wouldn't accept any repayment and insisted I hang on to it.
It was pretty strange seeing people wearing traditional Arabic robes and listening to iPods.
Muslim women in the United Arab Emirates apparently have more fashion freedom than is normal. As far as I could tell, if they were wearing a head scarf, they were ok. I saw everything from full black burkhas with complete face veils, leaving only eye slits open, to skin-tight jeans and tight T-shirts (topped with a head scarf) and nobody seemed to note the difference. Burkhas came in some variety as well. Plain black was the most common, but there were "dressy" burkhas with embroidary, sequins and swarovski crystals as well.
I'm glad for the opportunity to visit, but I'm very glad to be back in the United States once again!